The federal government is seeking to change what’s needed for food products to brand themselves “healthy,” as part of the White House’s plan to boost nutrition nationally.

The Biden administration wants to end hunger by 2030 and ramp up nutrition in a country where the obesity rate now tops 40%. But its recommendations, highlighted on Wednesday in the first summit on the topic since 1969, are largely dependent on congressional cooperation and agency actions.

The Food and Drug Administration’s proposed rule to overhaul the “healthy” definition on food labels, is an early concrete action from the White House’s hunger goals. If such a rule goes through, it could tighten what food companies such as and need to call their products healthy, addressing longstanding concerns that Americans are eating too many processed foods and don’t understand how to properly get their nutrients.

“Today’s action is an important step toward accomplishing a number of nutrition-related priorities, which include empowering consumers with information to choose healthier diets and establishing healthy eating habits early,” FDA Commissioner Robert Califf said in a statement. 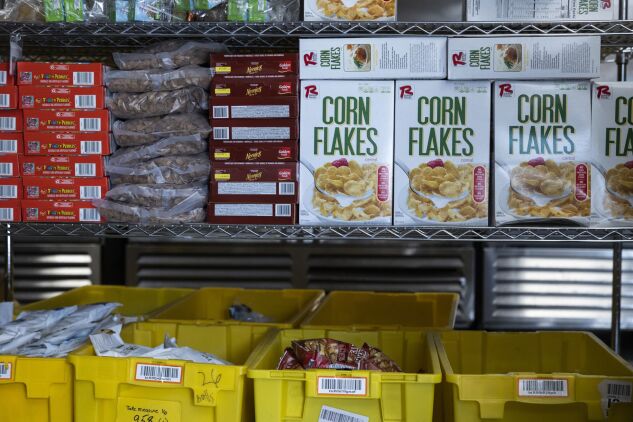 Boxes of cereal on the shelves of the Murphy’s Giving Market food bank in Upper Darby, Pa., on Sept. 26, 2022.

More than 1 in 10 Americans have diabetes, a disease linked to poor nutrition, and diet-related health conditions have been on the rise in recent years. Nutrition advocates point out that diet-linked health issues are most severe in low-income populations, where low wages and high produce costs make accessing processed, packaged foods far easier than eating fresh meals.

Under the proposed rule, food products would need to contain a significant amount of at least one food group recommended in the US Dietary Guidelines, such as fruits or vegetables. They also would need to meet requirements for nutrients like saturated fat, sodium, and added sugars, which would vary based on the food group.

Right now, the FDA’s definition allows companies to claim some foods as “healthy” when they “contain levels of nutrients that would not help consumers maintain healthy dietary practices,” the agency wrote. Some foods, like salmon, also can’t say they’re “healthy” because of elevated fat levels — which a more tailored definition would address by acknowledging different requirements for different food groups.

The agency also plans to craft a plan for front-of-package labeling, as part of the White House’s hunger, nutrition, and health strategy. Any new requirements on food labeling could spark protests from food manufacturers; trade groups have emphasized their wish for voluntary labeling changes rather than restrictions.

“We urge against implementing policies that may inadvertently hurt consumers, especially in the volatile economic environment that has caused a spike in the cost to manufacture grocery products,” Sarah Gallo, vice president of product policy for the Consumer Brands Association, said in a statement . “Focusing on incentive-based and voluntary initiatives, such as voluntary interpretive front-of-pack labeling schemes that are fully backed by extensive research, has the potential to positively affect our shared hunger, nutrition and health policy goals.”